This is part five of a five-part series.

To read part one, What Does A Leadership Council Do, click here.

Legitimacy is based upon respect through association. It’s similar to the way a prospective employer checks an applicant’s job references. A leadership council is a group of people who effectively say, through their association, “We’ve checked this group’s references and they’re solid.” As you can see in the diagram below, the legitimacy you convey upon your appointees in turn endows them with the bona fides of your organization. Therefore, as with any great power, you are advised to wield it carefully. Credibility is a hard-won and extremely valuable, particularly in times of crisis, when a leadership council can literally save your hide by speaking favorably on your behalf. 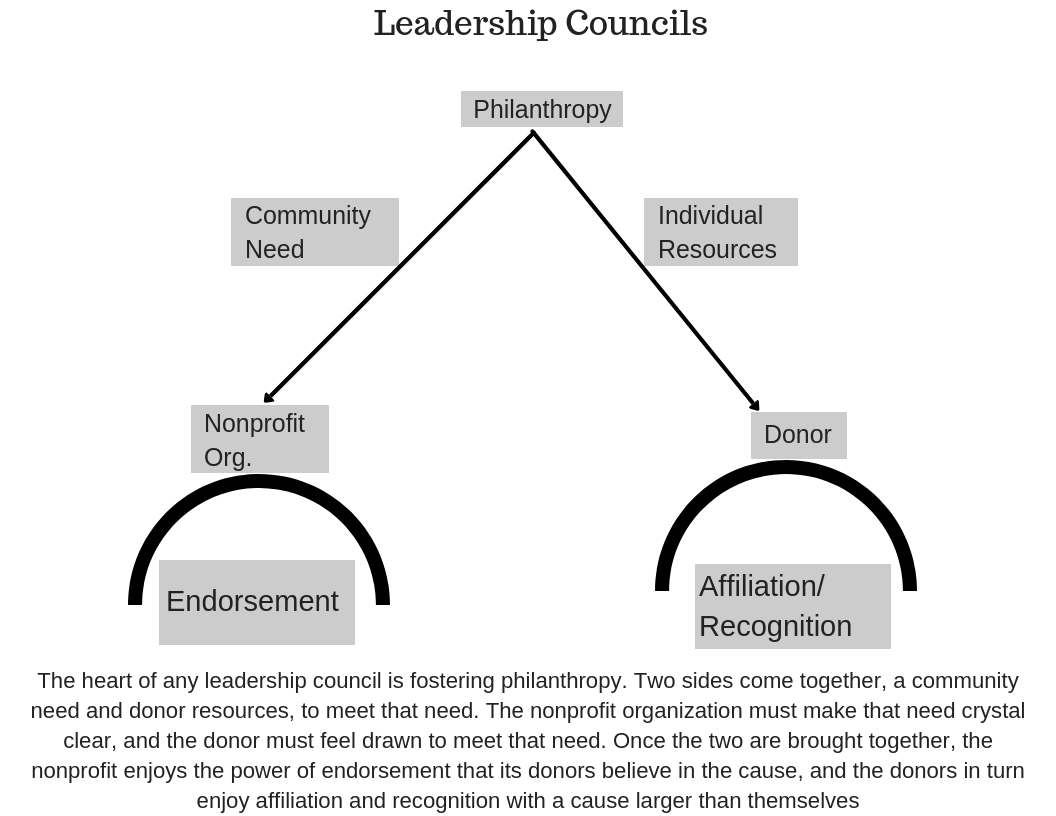 In 1990, I became the new CEO of an unknown nonprofit that was just a few years old. In my first week on the job, a prominent funder told me in no uncertain terms that there was a glut of agencies like ours—agencies with similar missions—and we should seriously consider folding. I was angry. I didn’t want to hear we were redundant; but in the quiet of my heart I knew he was right, and I also knew that if this agency was to continue we would have to find a way to distinguish ourselves from the “glut” of others and do so quickly. The solution, it turned out, was to establish an Honorary Council. How good of a solution was it? Twenty-three years later, that agency is still going, and stronger than ever. The funder had been right, but as they say, not so right that it killed us.

Here are the main aspects of our Honorary Council’s evolution:

The Council’s Purpose. We acutely needed advocates to distinguish and raise awareness of our agency in the wider community. We knew that community advocacy would keep our organization vibrant and responsive to community needs and build goodwill among our neighbors, political representatives, and prospective new donors. Successful council members helped build our agency’s reputation, influence and funding base. They hosted “parties with a purpose” on our behalf and recruited new members for our various organizational committees. The council’s purpose grew over time from a few people to over 55, not so much by design, although we did have a solid plan in place, but by the enthusiasm the members had for our work.

Naming the Council. We were not fond of the name “advisory board” because both words sent the wrong message: Advice is not what we wanted the group to provide (although we did welcome their input) and we did not want them to be a board in the same way our governing board was. We chose to call it an “Honorary Council” because, by allowing our agency to associate with their names, the council members were honoring us.

The Council’s Mission. The mission of an Honorary Council may vary depending on the needs of the organization, but all of the group’s members should be charged with helping with external relationships. Our Honorary Council was a nongoverning body designed to boost our agency’s public affairs in three broad areas:

The Council’s Structure and Responsibilities. Our council membership consisted of fifty-five prominent individuals from a cross-section of professional fields and areas of expertise. Their names appeared on our agency stationary and annual reports. Members were recruited from the fields of education, finance, and politics, and also included popular figures in politics or entertainment. The council had no governance or fiduciary responsibility. In addition to attending one annual gathering, members were encouraged to host one special annual “party with a purpose” fundraising event at their home or workplace. Six of them—the ones with the best networks—hosted parties, some on an annual basis and others every two years.

Issues for the Council to Address. By answering the following important questions before launching the council, we outlined a structure and procedures to solidify the council’s future and its workings vis-à-vis our board:

Ready, Set, Go. After only two planning meetings, we took these actions, many of which proved to be decisive:

The Results. We calculated that our Honorary Council had an annual return of $250,000 within the first two years, and then continued at that level annually for the next three years at a 10% growth trajectory. The funds came from the members themselves and others they had asked to give. We set annual benchmarks for the fundraising goals of the council based on each member’s past giving to us and their (carefully researched) capacity to give. We also documented that the council connected us with government and local leaders, which gained our agency much-needed credibility. This last outcome was actually more important that the cash support because we were unknown at the time and needed to distinguish ourselves.

What’s been your experience in starting and growing your own Leadership Council? Please let me know on the blog.