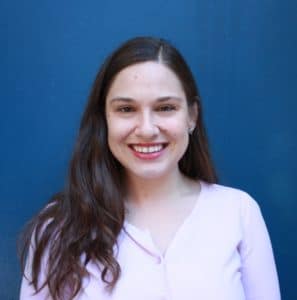 Sarah Broudy is a nonprofit professional with a background in fundraising and philanthropy, community organizing, and advocacy, with significant experience in the Jewish communal sector.

Recognizing that people are the drivers of change, Sarah takes a person-centered approach to relationship building. Prior to joining LAPA, Sarah served as the Director of Development at National Council of Jewish Women New York, where she helped the 125-year-old organization update and enhance its fundraising strategies and systems, resulting in increases in individual giving by 68% and institutional funding by 60%.

Originally from Metro-Detroit, Sarah received her BA in Political Science from the University of Michigan, as well as a Master of Public Administration Nonprofit Management and a Master of Hebrew and Judaic studies at NYU through the Robert F. Wagner School of Public Service and the Skirball Department’s dual MPA-MA program. After more than a decade as a New Yorker, Sarah now resides in the Philadelphia area with her husband.